A Sunny Cycle – Linz to Grein

We wheeled over kerbs, across tram lines and down skinny alleys exploring the crisp clean city of Linz.  It gleamed like shiny white teeth in the early morning heat.  Our boat had already departed for the town of Grein, 40 miles down river.   It felt good to be back on the bicycles following the cycle path out of the city with the blue sky above and the grassy meadows around us.

While enjoying our peaceful surroundings all of us mistook a walking path to be the cycling path and it wasn’t long before we found ourselves huffing and puffing through the grassy meadows back tracking to the cycling path.  With clumps of grass in our bike wheels we continued on our merry way. 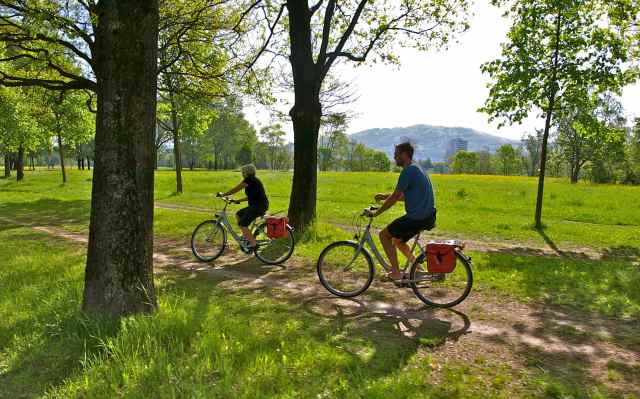 From then on the Danube river never seemed to leave our side becoming a trusted friend guiding us in the right direction.  Huge factories sat alongside the verge of the river along with cluttered foliage, butterflies and a number of crazy insects that fluttered either in the open space or into one’s face!

We soon met up with many other cyclists waiting on the river bank for the tiny bike ferry.  The sun had slowly heated up like an oven element and any piece of shade was quickly snapped up by a sweaty body.  The ferry ride was short and sweet and the cool river breeze was refreshing. 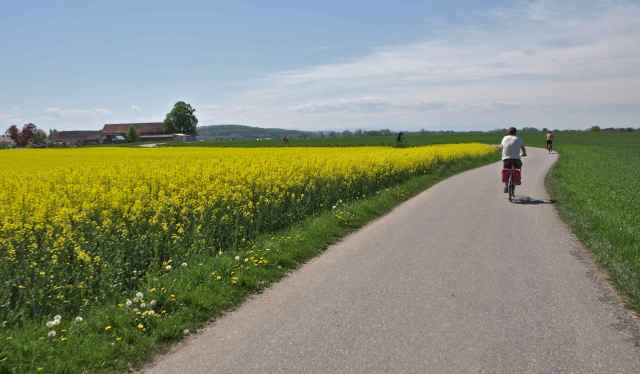 The cycle path diverted away from the river and we soon became surrounded by the golden-yellow rape fields trying to out shine the blue sky above.  We stopped for a quick game of hide and seek in among their giant stems then the golden fields lead us to some skinny paved roads.  These roads happily wove us like balls of wool through a handful of small sleepy villages and to a delightful restaurant for a bite to eat!

Back on the bikes and the temperature increased to a point where we all began to melt as if we were cheese under a grill.  The mother in law struggled the most, but the Boyfriend quickly came to the rescue.  He had found a long wooden stick which he used like an arm extension.  He happily cycled one-handed while pushing his mum’s bicycle from the back with the long wooden stick along the cycle path.  They sped along at a great pace to the amazement of other cyclists.  It really was an amusing sight! 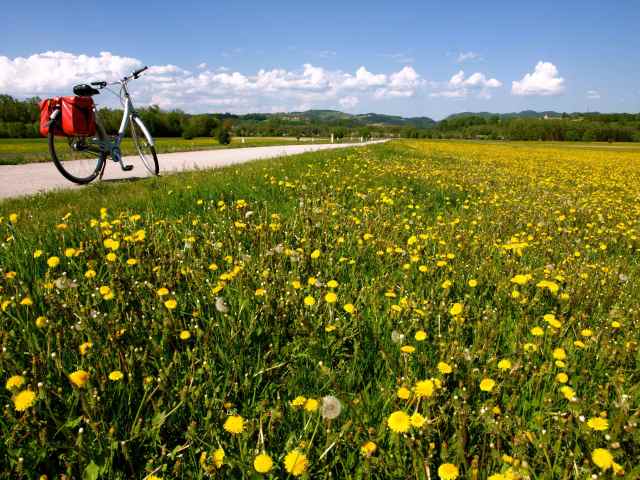 The flat land soon began to roll, the dandelions fields disappeared and the towering mountains began to show themselves again as we approached the picturesque town of Grein.  Our boat was waiting for our arrival like a welcoming host.

The castle loomed over us as we strolled the quiet streets.  Our three course meal was eagerly being prepared and as an added bonus we visited the Historic Town Theater.  It is the oldest theater preserved in its original state in central Europe.  Crafted by local artisans in 1791 the original hand painted ceilings, timber floors and a beautiful timber balcony take you back to a time where theatre was king! 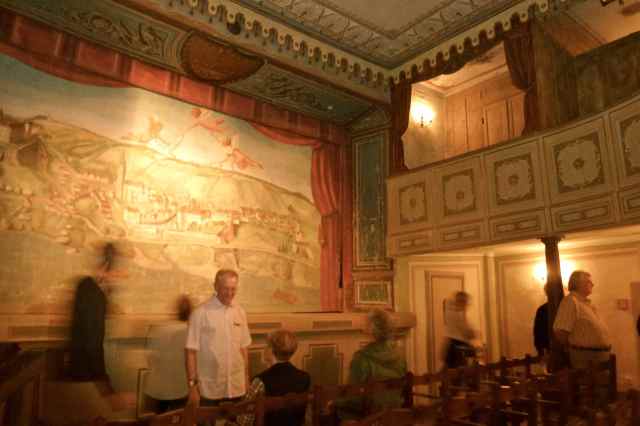 The day had surprised us with its little twists and turns and we looked forward to tomorrow – the word was out that the sun was coming along for the ride again!  Yippee!

9 Responses to A Sunny Cycle – Linz to Grein